So what if Lowe, say, agreed to come down on a Tues morning, and then return home Saturday evening?

And when Hallett said managers wouldn't entirely relocate did he mean the manager would, but he wouldn't move his family?
And is that the issue?
I can see why it would be. On paper looks OK as the manager is here all the time, but it can't work out for the best.
Away Day Specialist

To be honest I think we should.

If a manager doesn’t relocate how can he expect players when players usually have a shorter career at any one club. The logistics of being away from wife and children would bring up all sorts of problems that could arise. Issues at children’s schools, health and well being would be a priority to any absent parent and if problems arise it would mean that his mind would be elsewhere.

The other issue being that the new manager’s job role will entail his input onto all things green, from 1st team through ladies, reserves and football in the community it seems. It’s too much for one man in an effort to make Argyle too pc and cuddly. The club is about getting the best 1st team possible and the others to differing respects are secondary. That we had Adams who had very little else in life that he dedicated all his time to all the endeavours should be a warning of what we should be asking for. Maybe, it was because of his interest in the ancillaries that caused him to take his eye off the ball with the primary reason he was here.

Maybe, the answer (and I can’t believe i’m saying it) is to get Adams back on a severely reduced role and restrict him to first team and reserve matters.
The amount of people that confuse 'to' and 'too' is two damn high!

monkeywrench wrote: So what if Lowe, say, agreed to come down on a Tues morning, and then return home Saturday evening?

So if we're playing Oldham away, Lowe would drive to Plymouth to get a coach back to within a few miles of his home? Once you start going down this route it doesn't make sense.
Away Day Specialist

monkeywrench wrote: So what if Lowe, say, agreed to come down on a Tues morning, and then return home Saturday evening?

In that case, he seems to have changed his stance. Originally, he said that certain things were necessary and obvious. “MUST RELOCATE and must have proper coaching badges”.

Surely, it would be a big risk employing someone who would be, in effect, a part time manager. He even thought that Milton Keynes was too far from home and family.
His football philosophy is very impressive but if he is not prepared to commit 100% to being around full time at the training ground to implement that philosophy and sign players to buy into it with the same level of commitment he is not the right man and we need to move on to someone else.
Join The Big Green Lottery and support the Argyle Academy 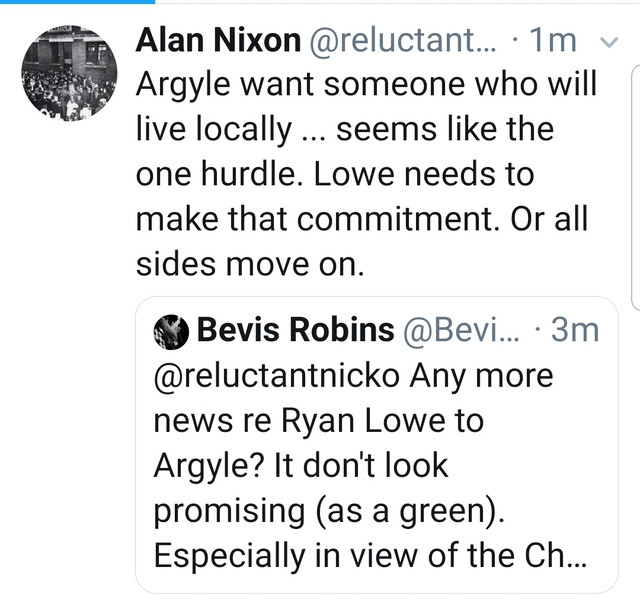 
The problem with this relocation thing is that football management jobs are rarely long term. I doubt many managers would be in a hurry to uproot their families when they know a run of 10 bad games could see them having to move again. From a practical point of view surely any manager would have to have some form of accommodation in the area. It's not as if there will be other clubs nearby if it goes wrong.

Per Alan Nixon, the ball is in Lowe's court. I suspect he's been given the weekend to think about it (hence SH's comment that no appointment over next 48 hours)

Emu wrote: Anyone in their late 30's/early 40's is revolunary and innovative. Anyone older than 50 is a dinosaur and behind the times.
I noticed it too Knibbs.

Also not true because a few of us have doubted whether Graham Coughlan is innovative or attacking enough. In the Premier League, I'd also see 60-year-old Maurizio Sarri as someone more innovative and modern than 38-year-old Scott Parker.

This isn't about age, it's all about ideas.

What 'ideas'? You haven't interviewed any of the candidates or watched their teams play. You haven't got a clue about Scott Parker's ideas have you? Or Graham Coughlan's. Both inherited struggling low confidence sides full of signings that weren't theirs, so what part those performances were about ideas? Those performances were about survival. You are peddling the usual twitter fanboy crap about what manager is brilliant and which one isn't based on hype and reputation, in turn influenced by age and nationality. You said so yourself that Argyle should appoint a foreign coach because they are better, all a part of the wider stereotyping that goes on in football. Managers can't possibly succeed if their face and profile don't fit.

You say I should stop being so dismissive of people's opinions, it is not your opinions I am dismissing it is your prejudices. All your judgemental nonsense about ideas, that a successful manager like Warnock, Wilder or Holloway isn't relevant because they aren't foreign and attacking teams with their full backs like Bielsa or that their setup is too standard and been seen before. It was telling when Roy Hodgson was appointed as Crystal Palace manager and labelled a dinosaur by Keown, the MotD pundits and the papers. The man has been England and Liverpool manager, taken Athletico Madrid to extra time in a cup final with his Fulham team, achieved far more in the game than any of his critics ever will. His Crystal Palace team attack with flair and ability and are a treat to watch. Far from a dinosaur he has breathed life and vigour into that team in the face of an ageist media who thought because he was an elderly English pensioner he couldn't possibly understand the modern game like Daniel Wagner or Ralph Hasenhuttl.

And my last point. We are in the fourth tier for christ sakes. It doesn't take ideas never seen on a football pitch before to get out of this division at the first attempt and get the club moving in the right direction. We just need a proven profesional who can command the respect of the players, make some astute signings, not blow the budget on rubbish. There is no reason Ian Holloway, Mike Flynn or Graham Coughlan can not achieve this.
Last edited by Knibbsworth on 10:41 18 May 2019, edited 1 time in total.

The compromise could be is give it a season of Lowe staying in Liverpool and managing Argyle from Tuesday to Saturday, during that time he'll find out if it works and we'll find out the same.

The club will need to decide if that's the right way forward and if Lowe is worth that compromise.

Graham Coughlan has been a coach at Southend and Bristol Rovers and now manager but his family have stayed in Sheffield.


I would rather wait to see what happens with Newport and approach Mike Flynn, or Holloway, or Coughlan, or whoever wants it from the fire in their bellies. Relocating to Plymouth should be non negotiable in my opinion. Lowe is clearly not excited and intimidated by the size of the opportunity enough, unlike Adams who would have walked over hot coals from Scotland to be here.

Users browsing this forum: No registered users and 384 guests