Rotherham United v Plymouth Argyle - the build up + Q&A | PASOTI
Menu
Install the app
You are using an out of date browser. It may not display this or other websites correctly.
You should upgrade or use an alternative browser.

The countdown to Rotherham

The Greens have played away at Rotherham 35 times; winning nine games, drawing eight and losing 18. The last win was a Championship game in October 2004 when Matt Doumbe scored the only goal of the game. The Pilgrims have played at the New York Stadium on just two occasions - a defeat and a draw.

The trip to Rotherham is the 10th longest away game of the season at 580 miles round trip and the first away game for fans since visiting Bradford City on Saturday 29 February 2020, a gap of 525 days.

Covid policies at the New York Stadium.
Facemasks
Our own stewarding and hospitality staff will be wearing masks within the stadium area and we are encouraging supporters to continue to wear masks when entering and moving around the stadium, although - as per current Government guidelines - this isn't compulsory.
There are hand sanitising stations located at every point of entry to the stadium and supporters are again encouraged to use these at their discretion during their time in our company at AESSEAL New York Stadium.

Social distancing
With the help of our catering partners at Elior UK, we have made efforts to reduce contact time around the concourses and the potential spread of coronavirus. To achieve this, we have installed hand sanitisers at each kiosk point.
Whilst there will be no screens at the point of service, the Elior UK staff will be wearing masks and we have marked out 1m+ social distancing guidelines which we politely request supporters adhere to whilst queuing.
In an attempt to help us ensure that we can track and trace any potential outbreaks of the virus, we will be displaying QR codes at each entrance, with each one linked to the relevant stand that you are entering.

Socially distanced seating
Supporters will NOT be sat in a socially distanced manner for our fixtures at AESSEAL New York Stadium.
However, as a club, we are keen to ensure that supporters feel comfortable at all times and if there is a point during the game when you start to feel uncomfortable due to the proximity of others, or people around you not wearing facemasks, please speak to a steward and we will aim to find alternative seating for you to ensure you can continue to enjoy your experience.

Tickets (for Argyle season ticket holders) and coach travel are available to purchase ... here. Big Green Lottery and flexi members can purchase a ticket from 9.30am Monday 2 August while general sale starts at 9.30am Tuesday 3 August.

Freddie Ladapo moved to Rotherham on a three-year contract in June 2019 after scoring 19 goals for Argyle. The transfer fee of £500,000 was a record for the Millers at that time (officially the fee was undisclosed) and Argyle's highest fee received for 11 years. It is believed that with add-ons and clauses the deal could be worth up to £650,000 for Argyle.
In his two seasons at Rotherham Ladapo scored 17 goals in his first campaign and nine in the second. 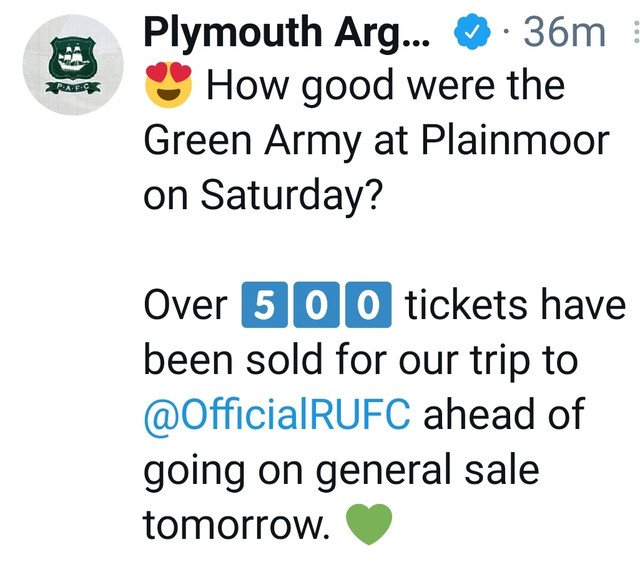 Rotherham are offering a free ticket for the match against Argyle if fans have a Covid vaccine before the game ... Rotherham club website.

According to Sky Bet the Millers are favourites to win the game at 4/5, an Argyle win has odds of 3/1 and the draw is on offer at 12/5.

Referee
Seb Stockbridge is the man in the middle for the game, last season he issued 100 yellow cards and four reds in 31 games. He was last in charge of an Argyle game in March last season when the Greens lost 2-1 away to MK Dons.
He will be assisted on Saturday by Marvyn Amphlett and Matthew Smith while the fourth official is Joe Simpson.

Argyle fans have now snapped up 800 tickets for the game ... club website.

Just over 900 tickets have now been sold to Argyle fans.

Rotherham fan Mark Thomas has kindly agreed to take part in a Q&A to give Pasoti users an insight into his club .....

Q: Given that the Covid pandemic financially affected all football clubs what is the current financial status at Rotherham?
A: Prior to our Chairman Tony Stewart taking over the club in 2008 two football insolvencies in quick succession resulted in us being docked 37 points from 2005-2008. Tony has supported the club financially alongside a strategy of careful financial management since he took over.

Q: Have Rotherham been busy in the transfer market ahead of the new season?
A: We have signed 4 new players: Hakeem Odoffin, a towering 23 year old English defensive midfielder from Hamilton Academical, described by the Edinburgh Evening News as the most underrated player in the Scottish top tier last season, probably because Hamilton finished bottom. Highly rated Oliver Rathbone, a 24 year old English central midfielder joins us from Rochdale on a 3 year deal after 183 appearances for Dale. He is a former Manchester United trainee. Centre- half Rarmani Edmonds-Green joins us on a season long loan from Huddersfield Town. 30 year old Northern Ireland international Shane Ferguson, a left back/left winger joins us from Millwall. Impressive additions. Hopefully for us, they will quickly gel.

Q: Striker Freddie Ladapo did well at Argyle scoring 19 goals, is he a fans’ favourite at Rotherham?
A: Freddie ‘the shot’ Ladapo acquired legendary status with Millers’ fans on 03 March 2021 when he ran from the edge of our box to collect a crossfield pass just inside the Sheffield Wednesday half and went on a driving run ending with a step over and wonderful curling shot into the corner of the net – the winning goal in the 97th minute (when we were down to 10 men) against the team we most love to beat on the planet. Me and my mates call him ‘the shot’ because he looks to shoot whenever he can.

Q: What are your thoughts on manager Paul Warne?
A: Paul Warne is one of the finest managers in our club’s history. He is a people person, places great emphasis on building strong relationships as part of the team ethic and cares passionately about the club, his players and fans. He insists on hard work.
He has achieved 2 promotions from League One as our manager.

Q: What are your expectations and predicted finishing position in League One for the season?
A: I expect a very competitive season with 8 or 9 teams presenting a formidable challenge for automatic promotion and the play-offs. If we steer clear of serious injuries to key players, avoid suspensions as far as possible and the new players gel well, we can be a top four side. I don’t expect top four though. I expect 8th or better.

Q: Without giving too much away what style of football and formation are Rotherham likely to use against Argyle?
A: With new players on board I’m not sure whether we will start with 3 or 4 at the back. I don’t go to friendlies, I regard them as pretend football so I’ve not seen how we’ve shaped up.
However, having watched about 72 of our league games over the last two seasons I can tell you that Michael Smith up front is a work horse, a warrior and a very good footballer. He will start either as lone striker or with Freddie Ladapo alongside him. Our style is mixed, some long passing to Smith who is a great hold up player and some slick passing through midfield. If Chieo Ogbene starts the Pilgrim’s defenders will have to be alert for he is lightning quick.

Q: Looking from afar what are your views on Plymouth Argyle?
A: The sleeping giant of the South West.

Q: Finally, do you have a prediction for the game?
A: If the Millers can make home advantage count 2-1 to us. But Argyle will have a good following and a 1-1 or 2-2 draw would not surprise me.

Car parking
Parking is available close to the stadium on the site of demolished Liquid nightclub on the corner of Main Street and Brinsworth Street, postcode S60 1EJ.

"Plymouth are really well coached. They have an attacking system and create plenty of chances. We’ve watched a few of their pre-season games and they are very comfortable on the ball, so I’m expecting them to have plenty of possession. "
Click to expand... 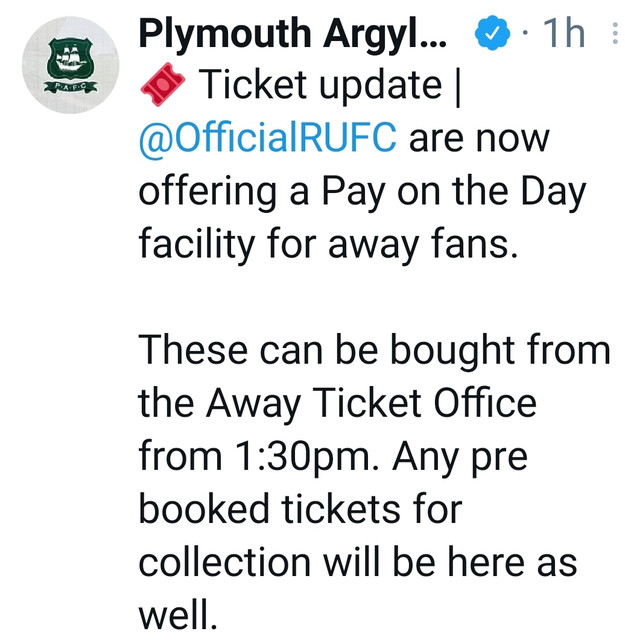 They only beat Grimsby 0-1 in a PSF so, according to the experts on here, they are obviously rubbish!!