Will Cummings bring Johnson down?

I think the problem with Dom is that everyone thinks he's a ridiculous scumbag now. Although the messages are obviously genuine, anyone who has been paying attention will not be surprised and Johnson's Trumpian fans will excuse him with either well all politicians are the same or that's just Boris being Boris.

Yes Dom got Johnson into power and Brexit done via lies, meaningless 3 word catchphrases and a bit of xenophobia thrown in but he failed in the pandemic and Brexit is the unfolding disaster which should have been obvious to a self styled genius. He also said he was ready to get rid of Johnson weeks after he was elected, ie an undemocratic coup by an unelected bureaucrat who told us our parliament was taking back control from Brussels!

And our Parliament was reduced yesterday to an MP being expelled for telling the truth about a PM who demonstrably lies compulsively to Parliament and the country, and he'll just carry on lying cos his fans don't care or even like it.
Reactions: Pilgrim Joe

I think your first paragraph hits the nail on the head.
Personally, I never listened to the interview or bothered to read about it, as he lost all credibility some time ago.
Politics from all parties makes for grim reading at the moment (unless you are a comedian).
The future doesn't look any brighter, unless people demand better from those we elect.
Not holding my breath for that to happen!

Pogleswoody said:
Johnson will bring Johnson down.
The question being, when?
Click to expand...

It's a demolition work-in-progress.
It could all come down with the Covid rule relaxation if things head south.
Or??... well, there are plenty of opportunities to put arse before face

Just about sums him up for me

I’m normally an optimist, but here’s what I find truly dispiriting. If any previous PM, from Churchill to Cameron, had done or said just two or three of the things Johnson has said or done, there would have been uproar and consequences. Yet both here and in America we have a huge percentage of the population who not only condone the lies and corruption, but seem to think even more of a leader who is of a totally different mould from previous, and is therefore on their side. I have any number of Tory friends, normally rational, who just can’t bring themselves to condemn his actions and consequences, and there are evidently sufficient republicans who still feel the same about Trump.

My concern is that once standards in political public life have reached such a low, and become the norm, how do we raise them again once the greater public finds these standards perfectly acceptable, and no single party can garner sufficient votes to provide an alternative? The only solution surely is a broad left of centre alliance, and I see little evidence this will ever come about.

One ray of hope Mervyn is Starmer saying the other day Labour would be willing to work with LibDems & Greens at the next GE.

YouGov poll yesterday has Tories on 38%, Labour 34% LDs 9% Greens 8%, and whatever you think of Dawn Butler, - I think she's part of Labour's problem, - I think maybe some people are realising as Joe has illustrated, that the emperor has no clothes.

Can anybody explain what Dawn Butler has done wrong.

Martyn said:
Can anybody explain what Dawn Butler has done wrong.

Did she really get expelled for telling the truth?

Oh. I thought she was expelled for using unparliamentary language by calling Bojo a liar which broke the rules of politeness expected in the House of Commons chamber.

You’ve been TMKF’d haven’t you. You see/hear something and then morph it into something completely different to suit what you want to see/hear

wrong, nothing to do with unparliamentary language or politeness.

She was suspended for telling the truth that Johnson lies regularly and knowingly to the house.

The parliamentary code assumes that members are people of honour who would not knowingly lie to the house. And that has broadly been the case pre Johnson.

She rightly pointed out that if Johnson isn’t following the rules of the house then she is justified in pointing this out . So she was suspended for doing what he does all the time for which he is never punished.

The problems here are Johnson breaking the rules of the house by continuously lying and the speaker not enforcing the rules by recalling Johnson to correct his lies. I think they should continue to do it every day until Johnson stops lying and parliamentary standards are restored.

And potty please stop obsessing about me and pretending not to read my posts, it’s embarrassing.
Reactions: Martyn 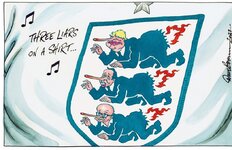 Oh blimey, potty, she was expelled for telling the truth.

The point is Johnson, is a renowned liar, he was sacked by a newspaper for lying. He repeatedly gets away with in the house, and Dawn Butler was pointing this out. Blimey how can you condone such a Buffon like Johnson.
He is becoming the worst PM we have ever had.

I agree with all the other comments though - regardless of party he's a clear winner for incompetence, lying, no integrity, no standards, no moral fibre .... etc, etc, etc

Not a rosette thing - he's literally run the country into the ground with his dithering and vanity projects.

Certainly will get his place in history, although not for the reasons he'd like.