I remember his 40 yarder v Southampton many years ago. 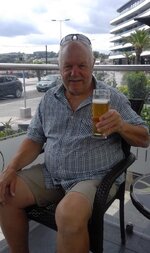 Was that the one just after they’d paraded the FA Cup around? Great player. Such a shame

A player who played for all 3 Devon Clubs.

2 years younger than me. Gulp.

Sad news. No nonsense, no frills full back.

The goal against Southampton was a cross that found the back of the net. Good times.
Last edited: Oct 1, 2021
Reactions: Ironman and briangreen

pastiesforlife said:
Sad news. No nonsense, no frills full back.

The goal against Southampton was a cross that found the back of the net. Good times.
Click to expand...

Remember it well. Right behind it. Could have been a cross but certainly flew in. Easter game with 20000 plus there. 10 mins from the end. The roof came off. Argyle won 1.0. Thanks for the memory Peter.
Reactions: Rowlypilgrim

I remember that match really well coz Argyle had asked for volunteers to come & pick loads of stones off the what was to become training pitches. Me & a mate volunteered & got free tickets for the match. Happy days.
Just checked ; 45 years ago !!! bleddy hell.

Sad to hear that. Like others on here, I was at that game. Crowd of about 25k on a bank holiday I think. Southampton had a side full of top players, but their minds might have been on the FA cup final which was their next match against Man Utd.

RIP Driller Darke as Harley Lawer christened him in the Indy.
Reactions: AdelaideGreen

Another gone too young. A no frills lower league defender who always gave it his all. Remember the Southampton goal. RIP.

Fond memories of his 100% commitment in every game. RIP Pilgrim

RIP Peter
Well remember that goal against Southampton. What memories you gave us.

Very sad news for his family and for all of the Argyle fans who remember that goal on Easter Saturday, 1976.

We used to stand in the Devonport End back then to the right of the goal. As the ball came in from the Lyndhurst you could see that Ian Turner had misjudged the flight. I'm sure it was intended as a cross to the far post but it ended up being a match winning goal. I think Darkie put a bit of check-side on the ball.

Also remember him playing for Saltash as a CB in the Western League towards the end of his career. I don’t think many CFs looked forward to coming up against him on a Saturday.
Reactions: Rowlypilgrim

I did not see his well remembered goal but I certainly recall him playing with his fine head of long curly hair flowing behind him. A local lad who performed well for the top SW club. R I P Peter Darke
Reactions: saxman
You must log in or register to reply here.
Share:
Facebook Twitter Reddit Pinterest Tumblr WhatsApp Email Share Link
Top Bottom