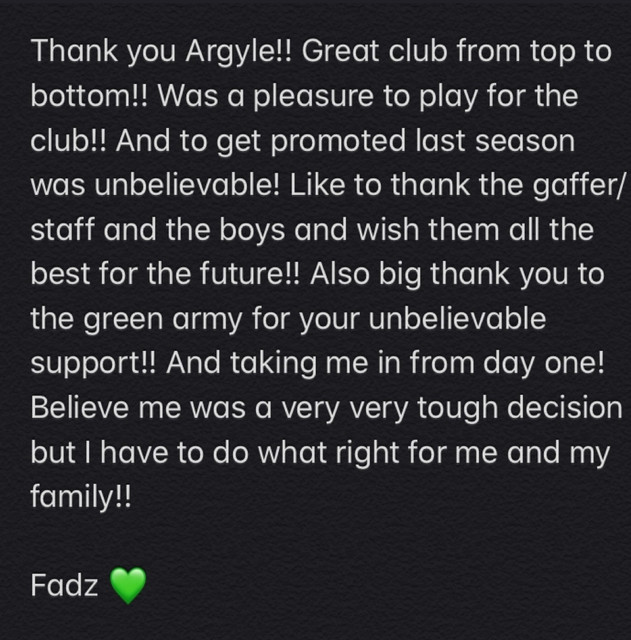 McFadzean never stays long at any club, he's 26 and the next club will be his 10th.

Fair play, nice message. We never know all the details, locations and factors involved in people's families and I would never criticise anyone who finds they have a decision to make and puts their family first, particularly when first becoming a parent. Good luck Fadz, I'd rather he'd stayed but I have faith we'll find a suitable replacement.

It might just be the loss of one player, but it's knockbacks like this and Sarce that'll plant a seed of doubt in RL's mind about staying with us long-term.
Click to expand...

I’m not so pessimistic Woodsy. If you trawl through most fans websites there are regularly players at all clubs who feel they are in the wrong place at that stage in their career, and so move on. RL will be aware of this. Hasn’t stopped Hull, Norwich, Swansea, (and even Carlisle in the seventies) reaching the top flight.
Click to expand...

But it keeps happening to us, Mervyn. Twice this summer alone, and that after a promotion!

We're easily big enough to reach the Prem but won't if we can't build a successful team because players can't settle in Devon.
Click to expand...

Bit of an over-reaction here, it’s not as if we are losing another Paul Mariner or a few others I could mention.

With all due respect, Sarcevic and MacFadzean are journeymen lower-League players who have left a League 2 club at the end of their contracts to return back up North for family reasons. They were both important players for us last season and I thank them for their contribution to making the season the success that it was. They did well for us.

However, if/when Argyle are once again a decent Championship club or better, attracting and keeping players will be far less of an issue.

Even working within the constraints imposed on him, Lowe and his staff have the potential to achieve at least another promotion at HP at which time, players and their agents will be less worried about their wider families, the lure of chips and gravy, Haddock instead of Cod, or whatever the attraction is in living up North.
Click to expand...

There are other reasons for that, of course, but struggling to attract and hold onto players because of our location is right up there.

Maybe time to give Ryan Law a few opportunities, frankly I think he's better than Connor Grant being a natural LB/LWB.

All the best for the future and thank you for the goals etc.

briangreen":13voeor5 said:
Maybe time to give Ryan Law a few opportunities, frankly I think he's better than Connor Grant being a natural LB/LWB.
Click to expand...

I think he has a good chance. It is an important season for him and he needs to show enthusiasm and the stamina to make runs as an attacking option and the determination, fitness and speed to recover to also demonstrate his defensive qualities.
Wing back in the Ryan Lowe system is probably one of the most difficult positions in the team.
You must log in or register to reply here.
Share:
Facebook Twitter Reddit Pinterest Tumblr WhatsApp Email Share Link
Top Bottom