Love the AWAY kit

I think the away kit is awesome, the players stand out more and it looks great. Must be easier for the players to spot their teammates out of the corner of their eyes. Which must be an advantage.

Well we can't play in camouflage home AND away can we? 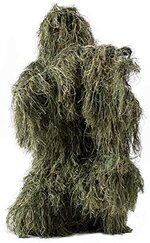 Reactions: Andy B. and saxman

Can Tom Yeti get a work permit to play football in the UK?
Reactions: IJN

Thought it would be too much to expect any sensible discussion on here.
Reactions: IJN

Touchy! I agree with you, but just exaggerating the point. The dark green home kit is in my opinion, is too dark and causes us a problem against the grass.

With all the science thrown at football these days I do wonder whether anyone anywhere has done a study on reaction times etc.

I remember reading some time ago that there was research done on goalkeeper kits which found that gks who wore bright/fluorescent kits appeared larger and so more impenetrable to an oncoming forward. And last season Manchester United (I think) changed the colour of the banners surrounding the Old Trafford pitch away from red because it was felt that the players were not seeing each other well with red shirts against a red backdrop.

Personally, I am absolutely convinced that players wearing bright/contrasting kits will be more visible to team-mates, especially in peripheral vision. So a player on the ball might be more aware of the movement of a team-mate who might otherwise be less visible to them. I suppose that this would also be offset to some extent by increased visibility to opposition players also but I am inclined to think that the positive effect would exceed the negative one - there's not really much scope for camouflage/stealth attacks in football whereas instant awareness of the position/movement of teammates could be a big advantage.

In Argyles case I don't think it shirts v pitch colour that is the issue (shirt green is significantly different from/darker than grass green) but, rather, darkness/dullness of shirts against the generally dark/dull colours surrounding the pitch.

I wonder if anyone has asked the players about this. It might not be a huge difference but if there is any negative impact of the shirt colour on the playing side of things then it ought to be modified.

It’s very reminiscent of the strip I first saw Bickle, Piper etc in all those years ago
Reactions: storming, Kernowboy, IJN and 1 other person

We had all white home kit (with green pin stipes -all the rage at the time) in 82-3 as well. At the time I think it was Bob Moncur as manager and I seem to remember he stated that this was to increase visibility of the players so this has been something people have thought about for some time. This was even an issue when we had "emerald" rather than "muddy" green. I can remember being outraged at the time but quickly coming to like the kit so am a fan of the away kit too. Don't remember us becoming world beaters mind!

IJN said:
Touchy! I agree with you, but just exaggerating the point. The dark green home kit is in my opinion, is too dark and causes us a problem against the grass.

With all the science thrown at football these days I do wonder whether anyone anywhere has done a study on reaction times etc.

And there i was thinking that grass green was the colour you wanted to see most Ian.

I cant think that anyone would fail to see the lovely dark shirt against the playing surface.

Kentishgreen said:
It’s very reminiscent of the strip I first saw Bickle, Piper etc in all those years ago
Click to expand...

My first team as well.

I really believe that for some home games we'll see the white away shorts being worn. And maybe vice versa when playing away if the opposition team play in white shorts and we'll wear black shorts with the away shirt.

On Saturday we are wearing the all white away strip as the ref has approved it despite Rotherham wearing white shorts. We are taking green shorts too just in case.
Reactions: Sainghin Green and macleanie