Martyn said:
Seriously, heading is part and parcel to the game of football.

Why don’t the authorities, do something useful, by banning boxing. Because that so called sport, is dangerous to every participant. Almost every boxer, has had serious brain issues and dementia, because of this.

If someone wants to get their head punched in on the name of sport, that’s their choice, let them crack on. Football is different as it’s a team sport and choosing not to head the ball effects the whole team.

I am not comparing the two.
Just pointing out every boxer had a mental health and brain issue problems.
So it is better to look at the damage, to every boxer, because of the severe blows to the head, in every match.

It is a very difficult subject. I just wonder if, Jeff Astle, for example, was warned early in his successful football career that heading the ball could affect his health in his later life, would it have changed his attitude to his chosen career?

I've played Sunday League football all my life and the part I hate most is having to stick my nut on the end of those long clearances from the goalkeeper that come down with snow on them. It can be quite painful, especially if you time it wrong (which at that level happens a lot), and I'll often find myself having moments of dizziness or 'seeing stars' for a couple of seconds after a big header.

It's hard to imagine what football would be like if heading was banned or limited to the penalty areas or something. Part of me thinks it would actually make the game more exciting and skilful. I'd be half-inclined to pilot it in a minor league somewhere and see what transpires.

How about banning heading of the ball in games unless it has bounced first. This would take the most damaging high energy headers out of the game but still maintains some elements of aerial play.
Reactions: GreenThing

The Doctor said:
How about banning heading of the ball in games unless it has bounced first. This would take the most damaging high energy headers out of the game but still maintains some elements of aerial play.
Click to expand...

Now that is a very good idea.

I'm old enough to have played with the dreaded "casey" football as a kid. Made of thick stitched leather and with protruding laces, and with nothing more than a scuffed dubbin coating, in the wet it became more or less a lead weight (never mind that it was twice the size of our heads to begin with!) and like greenpilled I remember various times when I saw stars and felt dizzy when I was stupid enough to head it.

This talk of reducing or banning headers will produce inevitable cries of "typical bloody wussy modern society" but tell that to Jeff Astle's widow and others - and I'm sure there are countless further examples that were never even diagnosed. The science just wasn't there back then, but now it is and we need to take note. Similar things are happening in American football and rugby.

I too like Doc's idea of letting the ball bounce once - that will take most of the energy out. Huge, lofted corners and free kicks with masses of backspin, anyone? Could be fun! 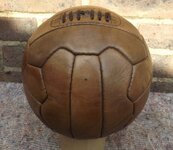