Latest from the Chairman

Do we still owe financial debt to anyone other than SH and family?

So refreshing the open and engaging approach adopted by Simon Hallett. I was a little concerned about how many well paid non playing staff we had as a 3rd tier club but there is so much happening and so much more to look forward to and they seem to be taking us as a club and team to the next level. The academy and our recent recruitment looks like providing us with some handsome transfer funds should we decide to profit. We have a real opportunity to take the place of some far worse run clubs who could take years to recover from their mismanagement. No dodgy funding, dodgy accounting or dodgy businessmen running Argyle which is a great relief.
As mentioned already by others, huge strides made with the academy and communications departments and we are rapidly saying goodbye to sub standard and archaic ground facilities.
The club do appear to listen to fan feedback too.
Good too to see Tony Wrathall taking the vacant President role, someone genuinely worthy of it after almost a lifetime of service to the club.
Personally I would like a solution to the segregation on big match days when we seem to lose so much capacity with a whole block lost and from a practical point of view swapping the home and away ends has it's merits for policing away fans, less segregation lost with the tunnel already at the Devonport end and home fans at the players' tunnel end. Certainly if we reach the second tier with larger away followings it makes a lot of sense.
A great time to be a green and so looking forward to actually watching 3 games from Boxing day to New Year's day.
Reactions: Emeraldinho, jthep and janner67

Tugboat said:
Do we still owe financial debt to anyone other than SH and family?
Click to expand...

Graham Clark will be along later Tuggy, he's the man with that knowledge.

I'd say 'not a bean', but I'm not an expert.
Reactions: Tugboat

I'll chuck this in here, as it just serves as a reminder how far we've moved away from the abyss.

These were taken yesterday. 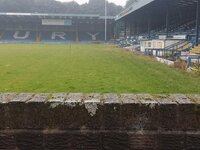 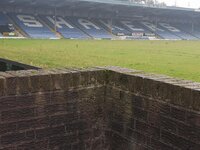 IJN said:
I'll chuck this in here, as it just serves as a reminder how far we've moved away from the abyss.

These were taken yesterday.

Yep perfectly sums up where we are. Thankfully started by James and continues with Simon. Could easily have gone the other way.
Reactions: David Doidge

So sad those pictures of gigg lane..devastating if that was home park.

IJN said:
Graham Clark will be along later Tuggy, he's the man with that knowledge.

By purchasing Tony Wrathall's shares Simon has taking his shareholding to over 21.2m shares. The other share holder is Richard Holliday with 300,000 and his family 15,000. So Simon's shareholding is around 98.5%. The shares are nominally valued at £1 per share. The last accounts did not show any borrowing as debt. No doubt the new accounts to be published next month will give the up-to-date position.

What it is shows is a remarkable level of investment in the Club by Simon and Jane. More importantly, that investment has been directed at areas that had previously been neglected over time due to other priorities and not aimed at buying on pitch improvement which as Derby County have recently demonstrated (and Argyle 10 years+ ago) is the road to ruin.

It is difficult to imagine a better run club in the EFL at all levels. In the dark days it would have been impossible to think that we could be talking in such terms. In my fifth decade of support I don't think I have been a prouder member of the Green Army. It really is what I wanted my football club to be.
Reactions: philevs, NLG, Dublin Green and 22 others

downinlooe said:
So sad those pictures of gigg lane..devastating if that was home park.
Click to expand...

Graham will tell you how close we were to that scenario.

Really positive update. Interesting comment from Simon regarding the upcoming accounts.. ‘You will like what you see’ Sounds very postive. Anyone know what the planning application outside the Grandstand is for? Really enjoying the Podcast as well.

Whilst I fully accept what Simon says... its our league position what counts for me....

oddball said:
Whilst I fully accept what Simon says... its our league position what counts for me....
Click to expand...

Yes and no. The first team is obviously the focus, but I’d rather be 15th with everything off the pitch in the best shape it’s ever been, than 1st with crumbling infrastructure and financial problems.

It’s the difference between a house built with solid foundations, and one built on sand.
Reactions: Dublin Green, greenpizzapie, Greenfox and 5 others

Wonderful and a very uplifting update from the chairman!

Thanks Simon, we are well and truly in good hands!

Great news generally from SH....I found this bit surprising though....... "We will begin replacing many of the plastic seats that were installed over 20 years ago and are now approaching the end of their lives."
The bill for replacing 12600 seats is going to be a sizeable 6 figure one, and I don't see a problem with them as they are. I wonder if part of the plan is to install wider seats ? If so the horseshoe capacity goes down 10-20 % ? Strange.
You must log in or register to reply here.
Share:
Facebook Twitter Reddit Pinterest Tumblr WhatsApp Email Share Link
Top Bottom