Jordan Houghton - An overview of our new signing 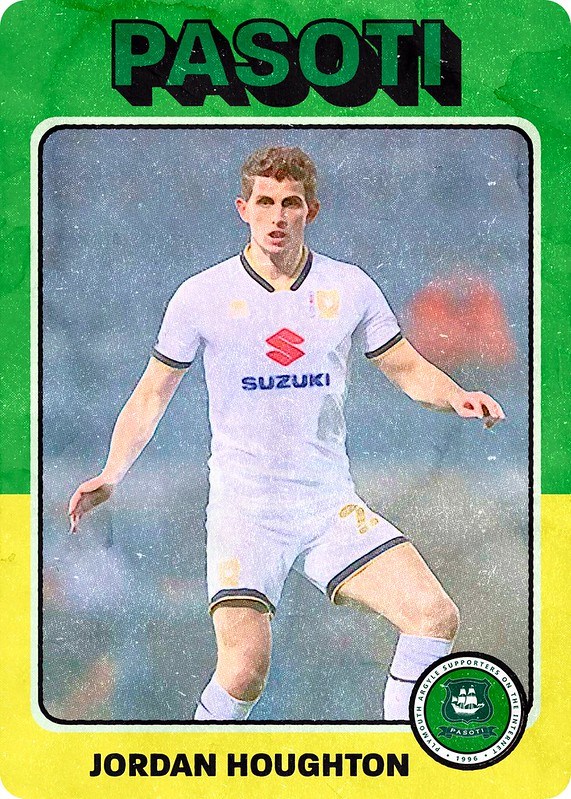 Heading back to Argyle for his second spell, Jordan Houghton arrives at Home Park with a point to prove.

The ex-Chelsea trainee first signed for the club as part of their U8 Team in 2003 and spent a further 11 years with
the Academy before signing his first professional contract. At this point, Houghton had already gained seven U16, eight U17 and two U20 Caps for the England national team.

But with no real room for manoeuvre in Jose Mourinho's Premier League-winning team that featured Cesc Fabregas, Oscar, Eden Hazard and Willian, it was no surprise that Houghton was eventually loaned to Gillingham at the beginning of the 2015/16 season for 6 months.

It wasn't long before Houghton was able to establish himself as a solid first-teamer at Priestfields, playing in all but one of the Gills seven-game unbeaten start to the season. Shortly afterwards Houghton scored his first professional goal against Fleetwood in a 5-1 drubbing.

Despite some positive form and even with Gillingham sitting 3rd in League One Gills manager, Justin Edinburgh, decided against extending Houghton's loan and was sent back to Chelsea.

Two months later, Houghton joined Argyle on loan until the end of the season. At that point Argyle found themselves fighting for promotion in third place in League Two. Houghton made his debut just two days after signing and played the full 90 minutes in a 2-1 defeat at Accrington Stanley.

He registered his first and only goal for Argyle in the 2-0 win over Morecambe at Home Park and continued to play a part in Argyle's promotion place up until Argyle final league game of the season, an emphatic 5-0 win over Hartlepool. He missed the Play-Off Semi-final matches against Portsmouth and was an unused substitute for the 2-0 defeat at Wembley against Wimbledon.

The 2016/17 and 2017/18 seasons saw Houghton join Doncaster Rovers for a fairly successful two years. Despite returning to Chelsea in February 2017 because of a knee injury he still amassed a total of 76 appearances scoring one goal in each of the seasons. Houghton also gained a 3rd Place Promotion medal for the 2016/17 campaign.

Following his release from Chelsea and ending a 15-year association with the Club, Houghton eventually signed for League Two outfit MK Dons on an initial two-year deal. His first season ended with joy as Doncaster were promoted from League two which also saw Houghton gain his second 3rd Place Promotion medal.

The following season, 2019/20, was affected by the Covid 19 pandemic which saw the majority of football leagues cut short. Despite this, Houghton still made over 30 appearances, scoring 2 goals, his highest total to date.

His spell at the Stadium: MK was extended by a further year, but he only managed to contribute 19 league appearances in the 20/21 season as the club finished 13th. He was ultimately released at the end of the season as his contract had expired.

Houghton came to Argyle in 2015/16 very much a boy, but now several years later, he returns as a well-experienced professional with over 200 appearances to his name. If he manages this season well, avoids injury and makes the holding midfielder role his own, then I can't see any clear reason why he won't be part of the backbone for this team in years to come.

At 25 years old he is heading into the prime of his career and needs to find the magic touch that made Chelsea management and fans look forward to him breaking into the first team. But despite joining a Free, Houghton wouldn't have been cheap. Reported to have been on £3K a week at MK Dons, I would imagine Argyle are paying the same. Fair play to Simon and Jane Hallett and the rest of the Board for backing Ryan Lowe in this signing.

If he works hard and protects the defence then he's doing his job. And as such we shouldn't be expecting goals from him either. In fact, across the six seasons, he has played regular football he has only scored 8 times.

Ultimately, Houghton needs to be judged on how well he breaks down the opposing team's attacks and how many goals he can prevent.

I feel this is a 'now or never' season for him. And oddly, enough, because of this, I feel Jordan Houghton will be the most exciting and frustrating signing of the forthcoming season.
Last edited: Jul 20, 2021
Reactions: DYX, PL2 3DQ and davie nine

Interesting that you think it's a "now or never" season for him. As you point out, he's now a seasoned pro with decent experience, and a good fitness record. If for some reason it doesn't work out for him at Argyle, then he'd get opportunities elsewhere.

If I were the manager (which I’m not) to and based on pre-season so far I’d have Adam Randell edging Houghton for the holding midfield role right now.

But I suspect given Houghton is the more senior player and on higher wages he will start the first league game of the season and it’s down to him to keep his shirt with Randell breathing down his neck for his place in the starting XI.

xmastree said:
Interesting that you think it's a "now or never" season for him. As you point out, he's now a seasoned pro with decent experience, and a good fitness record. If for some reason it doesn't work out for him at Argyle, then he'd get opportunities elsewhere.
Click to expand...

I meant now or never in terms of reaching the potential that was expected of him as a Chelsea youngster. Granted, he won’t make the Premier League but Championship at least (and hopefully with Argyle!)

JannerinCardiff said:
If I were the manager (which I’m not) to and based on pre-season so far I’d have Adam Randell edging Houghton for the holding midfield role right now.

But I suspect given Houghton is the more senior player and on higher wages he will start the first league game of the season and it’s down to him to keep his shirt with Randell breathing down his neck for his place in the starting XI.
Click to expand...

I agree on both counts.

I would love to see Randell make that spot his, but I would imagine it’s Houghtons until Randell gives Lowe no other no choice.

Potentially two of our better players. I wouldn't be sorry if Mr Lowe showed the flexibility to start both.
Reactions: Adam

xmastree said:
Potentially two of our better players. I wouldn't be sorry if Mr Lowe showed the flexibility to start both.
Click to expand...