James Wilson - An overview of our new signing | PASOTI
Menu
Install the app
You are using an out of date browser. It may not display this or other websites correctly.
You should upgrade or use an alternative browser.

James Wilson - An overview of our new signing 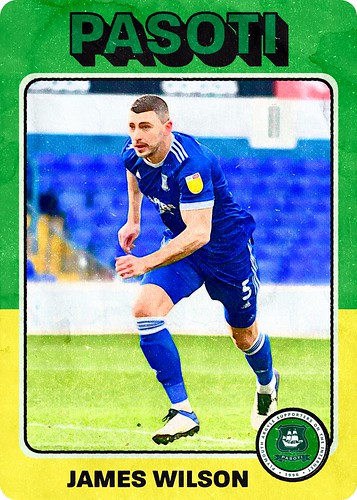 Rolling in as Argyle's first 2021 summer signing, James Wilson left Ipswich Town as their Player Of The Year.

Born in Newport, Wales James Wilson started out with Bristol City graduating from the Academy. On the back of Gary Johnson’s side finishing 4th in Championship, Wilson finally got his chance to impress in August 2008 and impress he did when he scored against Crewe Alexandra in a League Cup match.

However, despite his debut goal scoring exploits, Wilson was eventually loaned to Brentford for 3 months and played 16 times as part of a strong defence that secured a League Two promotion for the club and a Winner's medal for Wilson.

Upon his return, Wilson played a further two games for City to finish out the season, before returning to Brentford for another loan for the 2009/10 campaign. This time, however, game time was fairly limited with Wilson making just the 14 appearances for the recently promoted side who finished 9th in League One.

Over the next few seasons, Wilson sporadically made the first team for Bristol City, appearing 21 times in 2011/12 but only six times in the following season. He also had a short loan spell at Cheltenham Town, playing four times for the Robins.

Despite troubles at his parent club, Wilson built upon his U19 and U21 experience and earned his first full cap for the Wales national team in a 1-1 draw against a strong Belgium team that included Lukaku, De Bruyne and Eden Hazard.

On the last day of the January 2014 Transfer Window, he signed for Oldham until the end of the season, which was eventually extended to the end of the 2015-16 season with Wilson impressing in his performances and making a total of 109 appearances at Boundary Park.

Despite Oldham wanting to secure another deal, Wilson left for pastures new and joined Sheffield United making 10 appearances as they won promotion to the Championship. However, by the following season, he was frozen out and eventually joined Walsall for the 2017/18 campaign playing 20 games including Walsall’s 2-1 win over Argyle in September.

Realising that opportunities at Bramall Lane would be limited, once again Wilson left in the January transfer window, this time for Lincoln City. He found some success at Sincil Bank, making 16 appearances before breaking his ankle. Despite this, Lincoln won the League Two title. However, success was short-lived as Wilson’s contract was mutually terminated.

Signing for his eighth club, Wilson joined Ipswich Town and made the most appearances in a single season, 31, since his 2015/16 season with Oldham where he made 43.

A solid mainstay in the starting line-up of an Ipswich side who won their first six matches, Wilson made 18 appearances in an injury-hit season. Despite this, he was still voted Ipswich Town Player of the Year.

We thought it was a good idea to ask those who have seen James play live for their opinions too, and where better to start than at his most recent club, Ipswich town.

Thanks to those at Ipswich Town Fans Forum TWTD for participating.


"An experienced, solid League 1 defender. If we hadn't been looking for players ready for the Championship, we would happily have kept him here. Was part of a solid defence here, albeit in a team where the tactics were to pass the ball to death inside our own half and never take any risks." - Nthsuffolkblue


"Nobody deserved to win POTY but someone had to - all of our players last season was hopeless, he didn't play too much but wasn't terrible when he did! He's a solid and unspectacular defender, technically and on the ball, he's definitely a lower league player, but he reads the game well, wins his headers, makes his blocks and tackles - he was the best defending defender we had. He was released as the manager / new owners are trying to build a team to be competitive in the Championship and Wilson is probably a good league 1 defender and no higher." - rickw


"Solid, reliable. Bit old school, if in doubt kick it out defender who rarely lets you down. Not brilliant at any aspect but decent and solid at everything. I would say underrated by some ITFC fans but football is subjective so it depends on what you like doesn't it. At L1 a good defender esp for a team trying to establish themselves or push up to the top half of the table but ultimately not for promotion-chasing teams." - BlueandTruesince82


"Solid defender. Very understated. Fine at this level, but has probably reached his ceiling. Won't let you down, but don't be fooled by the POTY status. He was nothing special - just steady and dependable when fit." - Fixed_It

Having conceded 80 goals in the previous season, the Argyle defence leaked more than an outside tap. Lowe and his coaching team will be heavily relying on Wilson, and his defensive partner Dan Scarr to ensure that the backline this year is far, far meaner and tougher and we've previously seen under Lowe.

On the face of it (and from the Ipswich Fans comments) James Wilson looks a solid centre back. Standing at 6ft 3 inches and looking like a nasty piece of work, I do believe he’s going to be frequenting the nightmares of many opposing strikers this season. To his credit, he has achieved three Promotions and has won the EFL Trophy.

Although, one area that I am concerned about is the number of appearances that Wilson seems to achieve each season. On only four out of 15 seasons (only counting seasons where he played consecutively for Bristol City) has he surpassed 20 appearances.

Our first-team central defence consists of Wilson, Scarr, Gillesphey and Ollie Tomlinson. If Wilson were to be injured, then currently Tomlinson would have to step up, which by all means is possible, but in a season where Argyle need to have a solid backline, is Tomlinson up for the challenge?

More importantly, is Wilson up to beating the challenge of making 20+ appearances?
Last edited: Jul 18, 2021
Reactions: macleanie, DYX, PL2 3DQ and 1 other person

Why is this thread on its own and in bold above the main forum?

davie nine said:
Why is this thread on its own and in bold above the main forum?
Click to expand...

Never ask "Why?" Davie, we are mere pawns in the game of Pasoti, the owner will make whatever decision he wants without reference to his consumers.

Actually I think it is a good idea, personally, for those less "Argyle" than we regular users.

He’s a right-back. He could possibly play CB though, most sources I found online listed him as a RB though.

I think you'll find most of his appearances for us will be at RCB.

Totally agree, I think Bolton was signed to play CB not RWB.