They'll do anything to promote Verstappen. Red Bull is very rapidly becoming the new Ferrari!

Whether they were right or wrong to hand out points for a 2 lap ‘race’ behind the safety car, I cannot see that it was done to help Verstappen. After all, they had the opportunity to increase the penalty for Lewis at Silverstone and also the opportunity to reinstate Vettel’s second place in Hungary. Both of these options would have helped Verstappen, and both could have been done legitimately, but in both cases the appeals were thrown out without even hearing the evidence.

I think that could be really, really interesting. Russell has already shown what he can do in a Merc, and I wonder if we're going to see a McLaren Alonso/Hamilton situation in reverse. (It seems amazing now that Alonso was already considered something of an old master that long ago, but there we are. What was he at the time - late twenties or something?)

It makes you wonder how much effort Bottas is going to put into helping Hamilton for the rest of the season.

Time for Hamilton to retire - he obviously hasn't got the nerve/desire/cojones/??? this season. Can't even beat Bottas these days! Sad to see the goat going downhill and not realising it for himself.

Argylegames said:
Time for Hamilton to retire - he obviously hasn't got the nerve/desire/cojones/??? this season. Can't even beat Bottas these days! Sad to see the goat going downhill and not realising it for himself.
Click to expand...

He does seem to let pressure get to him. He was beaten by Button and Rosberg and now a bit of pressure from Max. With a fast teammate, new regs coming in next year which doesn’t guarantee Merc as a top car to be in, maybe it is time for him to leave with his reputation as the best intact.

Argylegames said:
Time for Hamilton to retire - he obviously hasn't got the nerve/desire/cojones/??? this season. Can't even beat Bottas these days! Sad to see the goat going downhill and not realising it for himself.
Click to expand... 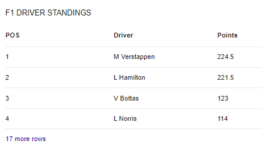 Yup he's trailing in the championship and can't even beat Bottas in qualifying. Last few seasons he was well clear and Bottas couldn't stay with him.
Not putting the pedal to the metal this season.

Argylegames said:
Yup he's trailing in the championship and can't even beat Bottas in qualifying. Last few seasons he was well clear and Bottas couldn't stay with him.
Not putting the pedal to the metal this season.
Click to expand...

What a good season this is, Max vs Lewis. Another racing incident today and I think a penalty for Max is unjustified. Max could have backed out but Lewis should have given him space (he also left less than one car width at the entry of the corner). At the end of the day, overtaking through a tight chicane is risky and likely to end in tears, but it’s the sort of thing we want to see and can be spectacular when it works. You have two drivers who won’t back down and it’s great to watch.

Also fantastic for McLaren. While they didn’t have Max or Lewis chasing them down later, they won that on merit. They defended the pit stops well and had enough to keep anyone behind them. Good stuff.

Imo Hamilton had the corner and Verstappen should have yielded the corner, dangerous to keep pushing when most of your wheels have left the track.
Three place grid penalty for the Russian Grand Prix for the out of control Dutchman...

Michael Masi has explained why the penalty was given. Both were at fault but Max was more at fault than Lewis. He stumbled and had to stop himself from saying that it was a racing incident. That’s why there shouldn’t be a penalty, keep the penalties for being stupid or cheating rather than two drivers going for the same but if tarmac.

Verstappen was not on the tarmac...

He had a go and couldn't complete his move, it was for him to yield.

He is too aggressive and needs to calm down. It is fine he is young and will learn, as did Lewis; but he needs to take responsibility.

Hamilton and Verstappen at it again. Good to see the Mclarens take advantage, with Riccardo taking a first win for the team.