Mike E said:
For those of us innocent bystanders could enlighten us further Micky ?
Click to expand...

Was just about to ask the same. Thanks.

There's going to be what appears to be a very well planned and heavily funded "patriotic rally" at the Capitol on September 18th involving the Proud Boys, the Oath Keepers and countless other stripes of neofascist MAGA crazies, supposedly in support of all those poor "political prisoners" - yes, that really is what they and many in the GOP call them - who are currently banged up, either still awaiting trial or having already been sentenced for their part in the January 6th "peaceful demonstration", as almost the entire Republican party is now pretending it was.

Back in May one Republican Congressman, Andrew Clyde, even said, "Watching the TV footage of those who entered the Capitol and walked through Statuary Hall, showed people in an orderly fashion in between the stanchions and ropes taking pictures. If you didn't know the footage was from January 6, you would actually think it was a normal tourist visit."

Believe it or not, September 18th in the US is also National Cheeseburger Day. Trump's staple diet - you couldn't make it up. (Or, who knows? Maybe that's actually why the date was chosen!)

Scary stuff. It’s serious enough that apparently many Washington residents have planned to move out of town for that date.

Let's hope that doesn't include the Capitol Police! And maybe this time the National Guard will actually be allowed to be there in advance rather than deliberately prevented from entering DC for hours, as happened on January 6th.

Edited to add: DC is not a state so, unlike all the actual states, it doesn't have its own branch of the National Guard. They had to be given permission from the Pentagon, and that go-ahead was mysteriously withheld for hours - thanks in large part, it would seem, to the brother of Trump-pardoned traitor General Michael Flynn.
Last edited: Sep 5, 2021

Wow, sounds horrific from what you are posting.

There's talk of re-erecting those huge fences they put up around the Capitol after the horse had bolted last time - but imagine if they're brought down somehow? Even if they're not, imagine the sight of thousands of rabid nutjobs on one side of the fence and thousands of law enforcement officers on the other side. Images of the Vandals or the Visigoths sacking Rome come to mind - talk about Barbarians at the gates.

Whatever happens, I can't help but think that it's all going to get very ugly, and will serve as yet another nail in the coffin of the notion of America as the self-proclaimed great leader of world democracy and peace. (Which was always largely a crock of sh1t anyway; it was always primarily about self-interest - oil, political dominance, whatever.)

One way or another, it doesn't look as if the "American Century" will live to see those hundred candles on the cake.
Last edited: Sep 5, 2021

And on that whole Trumpian way of life, I had to larf at the good old Lincoln Project (formed by a group of once-staunch Republican strategists - until Trump came along) and their take on the MAGA conspiracists' obsession with the horse and cow de-wormer, Ivermectin - cos, you know, injecting bleach or an animal medicine in massive concentrations never designed to be safe for humans makes so-o-o-o-o much more sense than an actual FDA-approved vaccine.

The video is a pitch-perfect pastiche of those ubiquitous ads that infest every corner of American TV and are designed to convince everyone that their life will be one of abject misery unless they're taking about 50 different medications every day.

Possibly an early sign of what's to come at the weekend:

US Capitol Police say they arrested a California man who had multiple knives in his truck, which had a swastika and other White supremacist symbols painted on it, near the Democratic National Committee headquarters early Monday morning.
Click to expand...

And aside from the swastika and White supremacist symbols, another genius way he chose to blend in and avoid arousing suspicion:

Police say the truck didn't have a license plate but instead a picture of an American flag.
Click to expand...

I hope it doesn’t get out of hand later.

Well, mercifully it turned out to be one big damp squib, thanks to a few factors such as GOP politicians avoiding it like the plague this time (but for legal rather than noble reasons); massive security including those big fences; MAGA crazies being convinced via online forums that it was just one big FBI honey trap; and the fact that Congress and SCOTUS weren't even in session so there was nobody in those buildings!

Organisers had a permit for 700 to attend, but only about 100 to 200 protesters turned up, Reuters reports.
Capitol Police said 400 to 450 people were inside the protest area - but that figure included the heavy media presence.
Click to expand...

I wish that could be taken as a sign that the madness is finally waning, but unfortuntely nothing could be further from the truth, with almost the entire GOP now having become the party of the Big Lie - because it's the excuse they're using for wrecking American democracy so they can get back in power as even more of a minority party than they are now, and then stay there indefinitely. 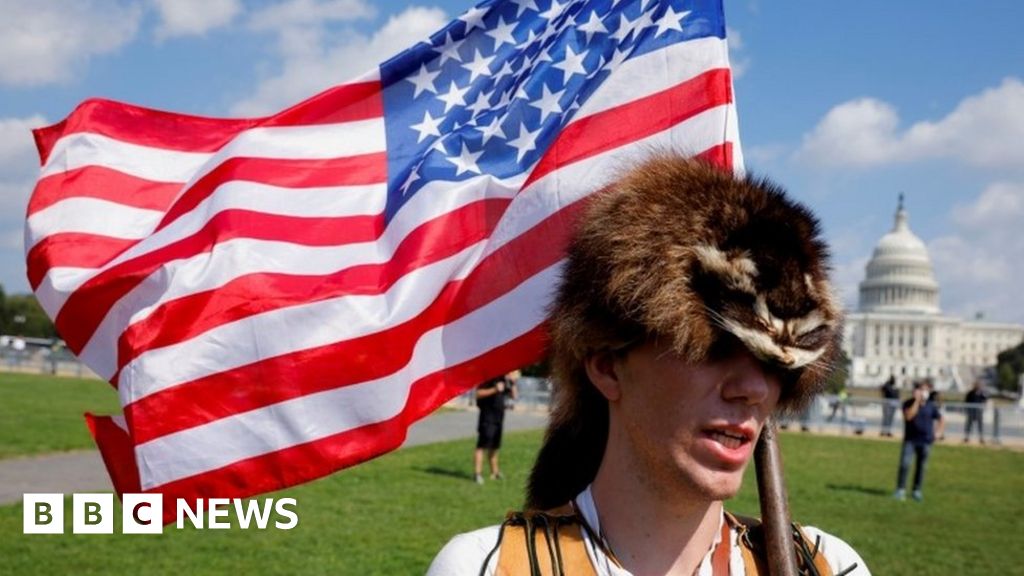 Hopefully some sort of recognition that 6th of January wasn't an innocent cheery day out and WAS a coordinated plot to overturn the legitimate result of the election.

None so blind as those that would not see

Well, here's a pretty shocking example of the ignorance and denialism of the MAGA crowd, from one of the few who turned up yesterday:


Hopefully some sort of recognition that 6th of January wasn't an innocent cheery day out and WAS a coordinated plot to overturn the legitimate result of the election.
Click to expand...

The democrats have thrown everything they can at trying to prove it was an insurrection. Every investigation shows that it wasn't. Just like the election wasn't stolen.

Straight out of the trump playbook, if you don’t like the objective truth say it didn’t happen. As in 1984 once the party got you “to reject the evidence of your eyes and ears it was their final most essential command”.

Sorry, are you saying, that it wasn’t an insurrection ?.