Callum Burton - An overview of our new signing 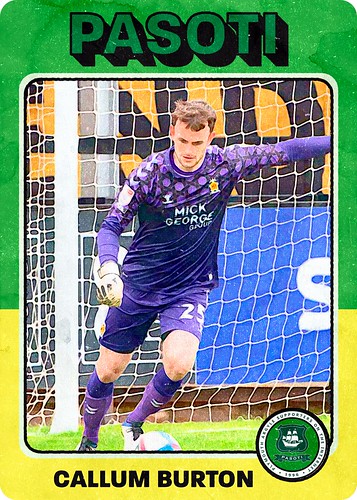 Having begun his career at Shrewsbury and after experiencing an abundance of loan spells at non-league clubs Burton eventually joined Hull City as their U23 Goalkeeper. Upon leaving New Meadow, Burton stated that he left Shrewsbury as he felt his career was stalling. Which, after having only made one appearance for the Shrews in seven years, seems a fair comment to make.

During his time with Shrewsbury and despite only making one appearance for them, Burton was capped at Under 16, 17, and 18 levels for England with clubs such as Wolves, Glasgow Rangers, and Aston Villa reportedly keeping tabs on him.

At Hull, and being the third choice keeper, it was expected that Burton’s appearances would be limited and it would be full nine months before he was named on the subs bench against Leicester City.

And so began Burtons most fruitful footballing experience to date, appearing over 35 times for his new club Cambridge United having signed as backup goalkeeper to Dimitar Mitov. It’s worth noting that 26 of the appearances came in Burtons' second and final season with Cambridge with Mitov only making 20 due to suffering a shoulder injury in January.

Upon his release from the Club at the end of the season, United Head Coach, Mark Bonner stated:

"Callum’s involvement in the team was excellent. He’s ended up playing 26 games in a promotion-winning side.”

Whilst in the number 1 spot, Burton gained 11 clean sheets.

We thought it was a good idea to ask those who have seen Callum play live for their opinions too, and where better to start than at his most recent club, Cambridge United, where he played his most matches.

Thanks to those at Cambridge United FC Proboards for participating.

"I think opinion was divided on Callum. Personally I loved his attitude and commitment and he was a very good shot stopper for us. He also saved a number of crucial penalties over the season. However, he sometimes had a tendency to palm the ball back into the danger area from shots instead of getting it to safety. I would have been very happy for him to stay and hope he does very well for you-except against us of course." - Shubs

"Callum started the season as 2nd choice but it was a fairly even battle for the starting role. When his opportunity came he certainly did not let the side down and became an integral part of the promotion winning team. Most unfortunate to be released but probably a good thing for his career long term as unlikely to be our #1 this season. Great attitude, always gives 100% and a good addition to your squad. Like most at this level, there are things to work on but desire to succeed is not one of them. Really hope he goes on to have good career at a decent level in the game." - The Abbey Stalker

"He was and will always be a Cambridge lockdown legend. Huge part of our promotion, brilliant penalty saver, great shot shopper and most importantly came across as a fantastic team guy. He pulled off some worldies!! I was gutted to see him go but can also understand the reasoning. Was genuinely really pleased he got himself fixed up quickly for next season. Hope he has a fantastic season (apart from two stinkers....but he will get a good cheer!!)" - Lionel

Burton is probably the most important signing thus far. Not only is he reported to be decent between the sticks, more importantly, but he will also be healthy competition for Cooper in the #1 spot.

Up until now, (and Alex Palmer withstanding given he was a loanee) Cooper hasn’t really had any competition for his spot. Jack Ruddy failed to deliver and Luke McCormick was emergency backup cover at best and played more of a mentor role. However, without having to fight for that shirt, Cooper’s development will be stunted. With Burton now arriving and having a fairly decent reputation, I believe we are going to see a real battle this season in the hope that both men improve.

Argyle face Cambridge fairly early on in the season, August 17th, so will it be the opportunity for Callum Burton to prove to them that they were wrong to release him?
Last edited: Jul 18, 2021
Reactions: macleanie, DYX, pilgrim steve and 13 others

Thanks, hoping to have our next one available this evening.

Like it then Ian, that's the SM way to do it.
Reactions: gru mpy and davie nine

Adam, perhaps we could have forum for these, so we can all look back and see how accurate (or otherwise) they actually work.

Got it!!
Reactions: IJN

You'll be telling us to access pasoti on our telephones next!