It would be good, if the Extinction Rebellion people, could reintroduce their protests, at the same time, as his visit.

In protest against the ‘great’, USA, as their are one of the biggest polluters along with China

Better still if nobody turned up to see him at all?
Let him be driven down The Mall in a golden carriage but how will he feel if he is waving to an empty pavement?

Who would want to go and see him?


I am sure the US Embassy staff would be ordered to pitch up and wave flags on the day. There is enough of them.


Last night I finished reading Commander in Cheat: How Golf Explains Trump, a book by long-time golf journalist Rick Reilly (who has played rounds with several presidents, including Trump). It's about far more than how Trump has shamelessly and blatantly cheated at golf all his life; it shows, yet again, that he's behaved truly despicably his enitre life, too, in treating other people, and the law, with utter contempt and plumbing bottomless depths of scumbaggery to get what he wants, no matter what.

Reilly quotes P. G. Wodehouse right at the start: "To find a man’s true character, play golf with him."

It's tempting to say that it's a pity that the book didn't come out before the election but I doubt that it would have changed one single vote.
PIES - Pilgrims In East Sussex


Should a president of the USA be able to visit the Uk - of course.

Should any president be offered a ‘ state visit’, - no

Should, previous presidents of countries like China, Saudi Arabia, Romania for example, have been given a ‘state visit’ No

Should we be able to protest about his visit. - yes. (As we can about any visit).

Should politicians be able to boycott meeting him. - of course.


Agreed to all that - and I'm very glad to see that Corbyn will be boycotting the state dinner.

Imagine "the special relationship" if, by chance, Corbyn ends up as prime minister and Trump is still president!
PIES - Pilgrims In East Sussex


I know it's all patently clear to anyone with half a brain anyway, and I know that those with less than half a brain believe that CNN is the Fake News Media! and the ENEMY OF THE PEOPLE! because Kim Don Triump tells them so; but Chris Cillizza quite regularly writes pieces on the lines of "The 50 Craziest Things Trump Said in His Rally Speech Last Night". Here's the latest from today:

They're always quite a chuckle!
PIES - Pilgrims In East Sussex


As they say ‘it’s all about the economy’.


Greenrod wrote: As they say ‘it’s all about the economy’.


Greenrod wrote: As they say ‘it’s all about the economy’.

Maybe it's all about the economy if all one cares about is money (more than ever of which now ends up in the pockets of the super-rich thanks to Trump's enormous tax cuts, skewed heavily in favour of the "haves").

The US economy could grow by 10% a quarter and I'd still say that Trump is an utter disaster for his country and the world - because it's about so much more than money.
PIES - Pilgrims In East Sussex


If I'd been keeping up to date with all the actions (and inactions) by the Trump administration that are bringing the Constitution, the rule of law and American democracy itself to the very brink of destruction I think I would have filled up several pages just since I last posted.

Instead I'll just stick to something related to the previous posts about the American economy. It really beggars belief but that dim-witted oaf in the Oval Office still - still! - believes that all these enormous tariffs he's imposing on imports are being paid by the country sending the goods to the US. In other words, according to his tweet on Friday... 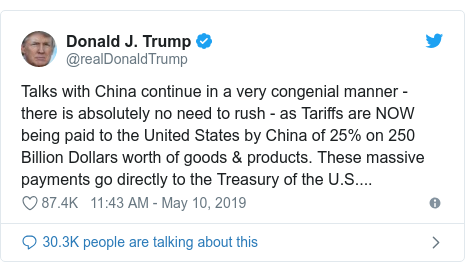 ...he thinks that the 25% levied on $250 billion of Chinese imports is being paid by the Chinese, when in fact it's being paid (as are all import duties - the clue is in the name) by the companies importing the goods. They then have to pass those huge extra costs on to the US consumer or risk bankruptcy, thus making everything affected much more expensive - to the tune of $62.5 billion in this one instance alone. In other words, he's effectively imposing huge tax rises on those least able to afford to pay, while conning his supporters that he's the working man's friend and handing his real friends - the rich - huge tax cuts.

No wonder he lost $1 billion in ten years, including on several "the house always wins unless Donald Trump owns it" casinos, having been given over $400 million by his dad who still had to come to his rescue several times, and is prepared to burn down the American legal system and the principle of coequal branches of government just to keep his more recent tax returns out of the public eye. He truly hasn't a clue.
PIES - Pilgrims In East Sussex


I see that Trump may soon get the war he needs to distract from all his continuing problems at home. When history comes to be written, what's the betting that this will turn out to be something akin to non-existent weapons of mass destruction or the notorious Gulf of Tonkin incident that conveniently allowed America to start bombing Vietnam bigly?

If it does kick off in Iran, Trump and his toadies in the White House and Congress, Fox News and Breitbart and the rest, will plumb previously unimaginable depths of nationalistic ghastliness, with all the investigations into his numerous criminal enterprises, and all respectable media outlets, branded shamefully unpatriotic. I suspect that we'll even hear the word treason bandied about. Wouldn't that be handy timing, especially in the build-up to 2020?

Let's be realistic: there's no way that Trump would go an entire term without at least one proper war, is there?
PIES - Pilgrims In East Sussex


Wow, that didn't take long, and it's not even war-related.

Trump says campaign was 'conclusively spied on,' calls it 'treason'